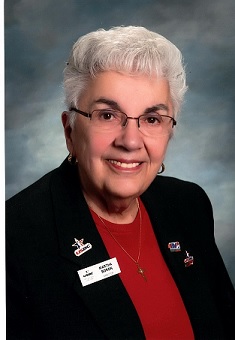 Martha (Martie) Boron began her bowling journey back in her home state of Maryland. She started bowling duckpins as a kid. When she went off to college at the University of Maryland she was introduced to the game of ten pins. In college Martie and her future husband Jerry joined a mixed league for fun. Following graduation Martie worked as a physical education teacher while she waited for Jerry to graduate through the G.I. Bill. After marrying and moving to Michigan Martie would go on to complete her Masters in Guidance and Counseling at the University of Michigan. In the early 70’s, someone would ask Martie to attend a meeting that would change her life.

Martie attended an annual meeting for the Tri-City Women’s Bowling Association and was immediately hooked by the administrative side of bowling.  In 1974, she was appointed to the Tri-City WBA Board of Directors. Martie would go on to hold every position on the local board except the secretary. Her tenure included 11 years as the association president. When the Tri-City WBA and the Western Wayne County Bowling Association merged Martie would go forward on the new board and except for a brief hiatus is still active on the Western Wayne County USBC Board today. Among her proudest accomplishments on her local board is the work they did on their BVL Tournament during the late 70’s and early 80’s. The association would also hold 50/50 collections for the BVL fundraising effort. For her efforts on behalf of her local association she was elected to their Hall of Fame in 1993.

During this time Martie would sadly lose her husband and rejoin the workforce. Her first job would be at Oak Lanes in Westland where she worked the counter and coached the youth.  After a couple more jobs Martie would land a position with the University of Michigan in 1985. In 2008, she would retire as the Assistant Director of the Ph.D. program at the business school at Michigan.

In 1996, Martie was elected as a director on the Michigan State Women’s Bowling Association.  She has represented the area which includes Western Wayne County, Arbor Valley, Monroe, and Lenawee to this day. In January, she was elected to represent the same area on the new merged state board. During her tenure on the state board she has been a member of the legislative, delegate reception and luncheon, and awards banquet committees. Martie was the chair of the tournament rules committee.  She has also been the Acting Sergeant at Arms during the annual meeting. On the state level Martie is most proud of the service and professionalism the association offers its members.  On the national level Martie had served on the teller committee during the WIBC days.

When Martie is not busy doing the work of bowling she can be found line dancing, cross stitching, and caring for her Green Cheeked Conure Parrot. She is also becoming a bird mom to a Lovebird in the near future.

For all the work on behalf of the lady bowlers in Michigan we welcome Martha (Martie) Boron as this year’s Hall of Fame recipient for Meritorious Service.