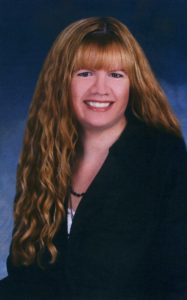 In 1992 the Michigan Women’s Bowling Association awarded Julie Wright a 1500 scholarship in the category of Star of Tomorrow. At that time she had been multi-bowling the Farmington Hills area for several years under the coaching leadership of her dad, Ed Wright, and had carried a 170 plus average since 1981. Julie also held six titles in the Michigan Junior Masters Association during her youth bowling years-all this while she was attending Oakland Community College and working part time for a law firm. Now she has graduated and works full time for a law firm.

She and husband Raymond are parents to nine-year-old daughter Cassidy. Julie recently qualified for the 200 plus averages in the Ten Pin Topics with a 207 in Western Wayne County USBC.

When asked if she wanted a “quote,” all she said was, “Just thank my Dad for me.”

Congratulations, Julie! You are a perfect addition to our Hall of Fame.