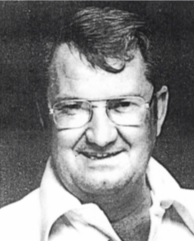 Howard moved to Flint from Sault Ste. Marie. His first bowling activities were as a 12 year old in the Upper Peninsula but the opportunities in those days (1940’s) were nothing to compare with todays programs.

That early experience whetted his curiosity and his interest grew after landing a job setting pins in Flint for T. J. Halligan at Flint Rec. He was a good listener. He picked up on the finer points of throwing a bowling ball so well that it wasn’t long before he was beating his teachers.

In 1959, Gilroy joined with Bud Lillard and Dr. Warren Clarke to form G. L. C. Bowling Supplies . The GLC Corp. has sponsored 100’s of bowling teams and is responsible for donating over $40,000.00 to the Mens and Womens City tourna­ments in Flint.

He averaged over 200 for 16 years and bowled with the same team for 25 years. He won the Michigan State Singles title in 1959. He has bowled in 37 ABC tourna­ments and his GLC team finished 5th in the Team event in Rochester, NY