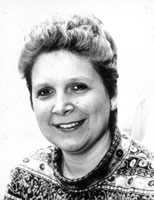 With determination and practice, Jeanne has developed into one of our best bowlers. Effortlessly she averaged 205 and 204 this past season. Highest average attained was 219 during the 1992/93 season.

Locally, she won the Handicap All Events in 1991 with a total of 2197. And, the same year, the Goebel Beer #2 Team of which she was Captain, were Actual Champion with a score of 2972. To compare scoring, this year the Contour Grips Team, captained by Jeanne, won the Actual and Handicap Divisions in the City Tournament with a record score of 3440 Actual and 3531 Handicap.

Jeanne has won many titles but the one she must be most proud of is the WIBC National Team Championship with a score of 3125 at the 1995 Tournament in Tucson. This beat the previous high score of 3096.

A niche has been prepared for Jeanne in the Michigan Women’s Bowling Association Superior Performance Category. We wish her continued success and many more titles.