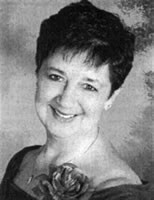 Being a member of the MWBA Board for 25 years, Sandra has served on many committees from Tournament Rules, Legislative, Hall of Fame, Awards and Services and others but she was a great ambassador when Chairman of the Membership Promotion Committee, planning the activities when visiting local Associations. She is currently Chairman of the Champion Awards Banquet and member of the Finance and Honorarium Committees.

When asked, she graciously accepted the job of MWBA Recording Secretary and has been doing this for the past eight years.

Locally, she was Secretary of the Cadillac WBA for 14 years and is now Sgt-at-Arms.

She was inducted into the Cadillac WBA Hall of Fame in 1993 and was named Secretary of the Year in 1999.

Sandy has been bowling since 1963, improving each year so that when she entered the Cadillac City Tournament in 1993 won the Actual and Handicap Singles with a high game of 257 and a 645 series. With her partner, she won the Handicap Doubles in 2001.

She is currently employed at Network Reporting as an Administrative Assistant. For all her involvement, Sandra deserves the Meritorious Service Award.