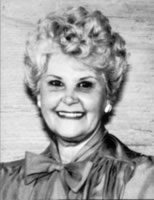 Bonnie has been involved in bowling for many years, as a bowler, a league officer, and goodwill ambassador.

In the State Tournament, she was on the Bob Chamberlain Team when they rolled 2812 to win the championship in 1987. She was also on the Pine Tree Lounge Team when they won in 1975 with 2803.

She has earned other titles as well. Among them, the Hoinke Ten Game Scratch Ladies Singles in 1974 with 2018 for ten games. The Champion of Champion Tournament twice and the Chicago American Team Tournament in 1969 and 1970.

A stand-out performer, Bonnie joins other greats in the Michigan Women’s Bowling Association Hall of Fame.