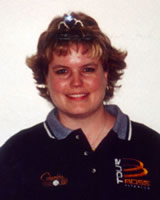 When bowling in the National Tournament in 2004, she rolled a 289 game in her singles.

Locally she won many events, Actual All Events and Doubles and was a member of the Champion Team in 2003 when they rolled a total of 3085.

Her most prestigious honor was winning the MWBA Queens Tournament in 2002 carrying a 221 average. Participating in five tournaments, she placed 3rd in 2003.

Julie makes a great addition to the ranks for Superior Performance and we wish her many more years of outstanding bowling.