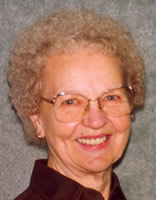 Norma is a member of the Marshall WBA and has been active for more than 40 years, getting involved in all aspects of the game.

Locally, she served as Sgt-at-Arms for one year, moved up to Vice-President for one year, then Treasurer for three years and, finally, was elected President in 1966, which position she held for 25 years. After giving up the Presidency, she was elected a Life Member in 1992.

For all her service and dedication, she was inducted into the Marshall Hall of Fame in 1993.

Norma became interested in State activities twenty-one years ago, was elected a director and held that position for 11 ½ years. She then served as First Vice-President for 6 ½ years and is currently in her third year as President.

She didn’t let any grass grow under her feet while on the State Board. She served as Chairman of the Finance & Budget Committee, Awards and Services, Delegates Reception & Luncheon, Membership Promotion, 25 Year Club, Hall of Fame, Champion Awards Dinner and Tournament Housing. She also served as a member of the following committees: WIBC 75th Anniversary Committee, Legislative, Tournament Rules and Scholarship.

Norma has been a member of the Michigan Bowling Council and is currently its President.

Norma is truly deserving recognition in the Meritorious Service Category.